The Hendershot Devise is a self-acting oscillator. It consists of a pair of large air-core coils in "basket weave" format, hand-made cylindrical capacitors inside the coils, several high-value capacitors, a couple of standard transformers and a permanent-magnet "buzzer" as a regulator. The two large coils are tuned to resonate together. The devise generates an AC output and can light a bank of light bulbs.

Hendershot's machine was not actually a motor, but a generator. It developed electricity which could power another motor but did not produce any usable motion itself. The idea for the generator first came to him in a dream in his early twenties. He forgot the idea for several years and was motivated to start working on it to replace the broken motor in his child's toy airplane. 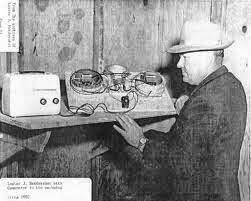 The Hendershot Generator (HG) is actually not your typical generator that we are normally accustomed to.  Although it might seem to be because when properly tuned the HG can generate electrical power but the power or electricity as we know it is actually a by-product of the HG and not actually what the HG technically does.  You see the HG is really more or less a highly sensitive antenna that picks up electromagnetic frequencies.  That's right it's actually a receiver just like the one in your transistor radio that when properly tuned can pick up one of the hundred's of radio frequencies that surround us even though we can't see them.  The HG is an antenna that receives  atmospheric electrical frequencies AKA: Electrostatics that are all around us.

Remember when you were a kid and you would rub your feet on the carpet and shock someone by touching them?  That's because there are millions of atmospheric electromagnetic particles (AKA: static electricity) floating all around us even though we can't see them.  What the HG does is pick up those micro electromagnetic electrical frequencies and then they are converted to low voltage that is then amplified to 60 cycles per second or also know as 110 volts of electricity.

I'm not sure why so many people have a problem with this concept when it naturally occurs around us all the time.  Think about a radio, what does it actually do?  It picks up radio waves out of the air and converts them into sound waves that can then be amplified so that you and the people across the street from you can hear your music even though they hate your choice of music.

So why can't the static electricity that is all around us be picked up and converted into low voltage and then amplified to a higher voltage?

I remember back in the 80's when I was selling and installing satellite systems for people who wanted to get rid of their cable company.  You see the cable companies had a monopoly and people were tired of paying for expensive and lousy service.  I would explain to my potential clients that the satellites were in a geostationary orbit (AKA:Clark Belt) that was located 22,236 miles above the equator.  At the time the satellites were sending down a signal across the continent that was only 4 watts, strong enough to power a small flashlight.  Once this signal was captured into the satellite dish it was then reflected into a focal point where the signal was then amplified through a Low-Noise Amplifier (LNA).  Once amplified the signal had to be sent to a converter where it was convert so that it could then be sent to your satellite receiver where it could then be watched on your television set.

The process although very complex is how we are able to watch a TV program that is being filmed live in New York and being watched 3,000 miles away in your living room in Sunny California.

Ok, so back to understanding the Hendershot Generator, it's this very same concept that Lester J. Hendershot stumbled upon when he was trying to invent a new compass.  He found that like a magnet there was some sort invisible electromagnetic energy field on the earth that was pulling towards the north pole.  He then set out to figure out a way to tune into this electromagnetic energy field with the hopes of somehow converting this energy and then amplifying it so that it could be used as electrical power we now know as electricity. 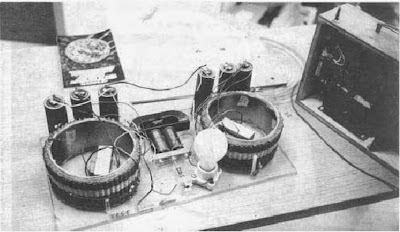 As you can see from the photo of the original Herdershot Generator, it looks somewhat like an old radio frequency receiver.

Here comes the real problem, once Lester Herdershot figures out how to tap into this never ending abundance of invisible electromagnetic static electricity how do you charge people for it?  How can the government charge a Tax on it or how can Big Business turn it off if you decide to stop paying for the device?  These were all the concerns that the government and big business had so, instead of tapping into a free source of energy lets just tell everyone that the "Hendershot Generator" is just a hoax and convince everyone that it can't be made and that it's really just one big scam!

This website is here to help promote the concept of "Free Energy" and to get the word out that the Hendershot Electromagnetic Receiver  (AKA: Hendershot Generator) is for real and that it can actually tune into the Electromagnetic Atmospheric Electricity thereby converting these Micro Electrical Frequencies into Low Voltage and then amplifying then into High Voltage that can be used to power a car, a house, a town or even an entire nation. 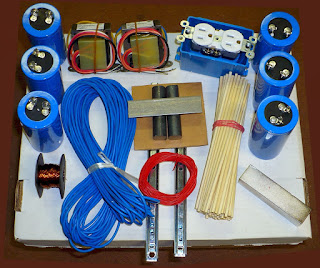